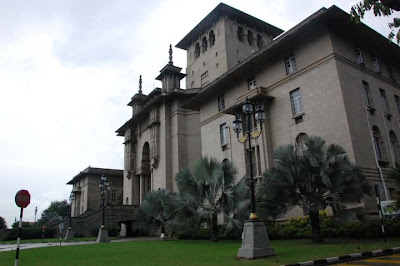 The foundation works for Bangunan Sultan Ibrahim began with the officiated ground breaking ceremony by Tengku Mahkota Sultan Ismail on Monday, 7th November 1938.The Royal Highness later laid the foundation stone on 10th March 1940. The building was complete in 1942 at a cost of $2 million. A banquet was held at the Royal Palace on Tuesday, 3rd November 1942 to mark the official opening of the state government office.

In 1942, during the World War II, the Japanese Imperial Army used it as a fortress and a command center to spy on the British activities in Singapore which was attacked days later. If you look closely at the walls, you can still see the damages from the invasion. It is a bitter reminder for us, the next generation of Johor about the worth of our Independence. We all shouldn't take it for granted.

The building is one of the few larger colonial building left in Johor Bahru. It houses the State Secretariat and the offices of the state government for 67 years until Johor state government announced that they will relocate to Nusajaya, Johor State New Administrative Center in 2010.

Rumor has it that Yayasan Warisan Johor is going to take over the building as their new headquarters. We hope this will bring new promises for the art scenes in Johor Bahru.